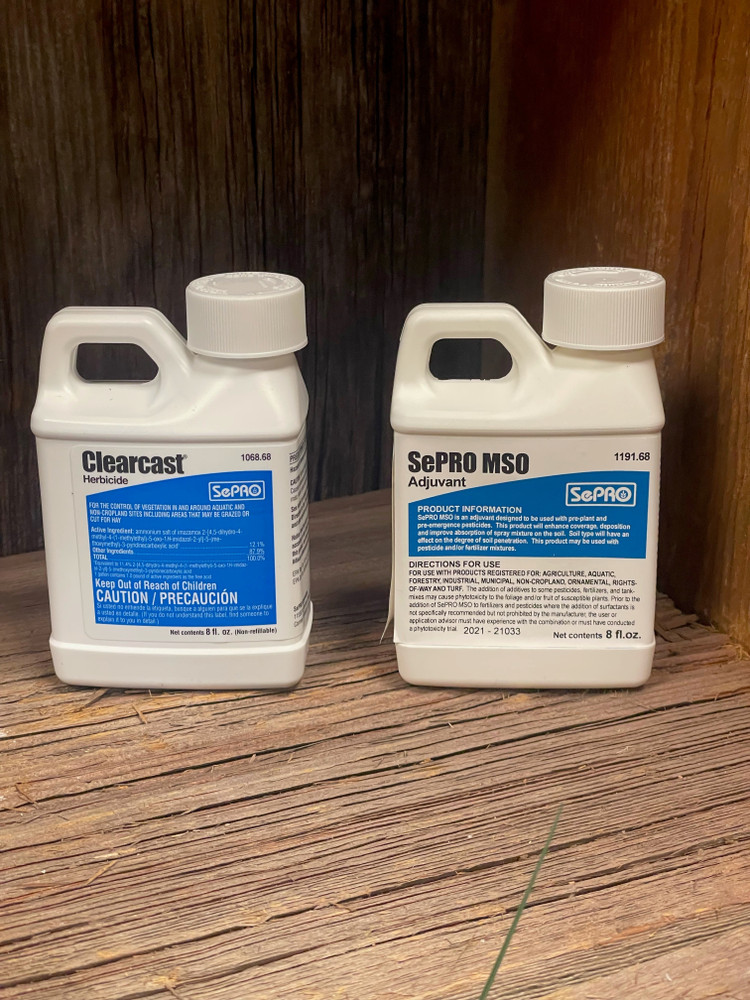 This bundle includes 8oz of Clearcast and 8oz SePRO MSO. With this bundle you get the perfect combination to control your unwanted weeds such as Cattails, Purple Loosestrife, Phragmites, and many more.

Clearcast Herbicide is an effective and selective treatment solution for the control of floating, emergent, and submersed aquatic weed species. Clearcast is the industry standard for cattail control. In addition to cattails, Clearcast is an excellent choice for selective control of invasive weeds such as watershield, water hyacinth and broad-spectrum control of a variety of pondweeds. Clearcast can be applied as a foliar, surface, or injection spray and as well as a pre-emergent in ponds and lakes.

Its selectivity makes Clearcast ideal for aquatic areas used for fishing and other recreational activities, while minimal irrigation restrictions allow Clearcast to be applied in a large variety of aquatic environments, including ponds and irrigation canals and ditches.

When used as directed, Clearcast:

Clearcast may be applied in a variety of ways, including:

*When applying a foliar application by boat, the boat trail must be adequately sprayed after passing through.

Clearcast has a very favorable environmental profile. Some of the benefits of Clearcast include:

SePRO MSO (methylated seed oil) is a wetting agent, activator and penetrant all-in-one that increases the effectiveness of many of SePRO's pond and lakefront products. SePRO MSO helps break down the waxy cuticle on the leaf surface and helps penetrate the bud and bark area of woody brush, allowing a more effective uptake of the herbicide., a low viscosity oil and is compatible with most aquatic herbicides and algaecides.