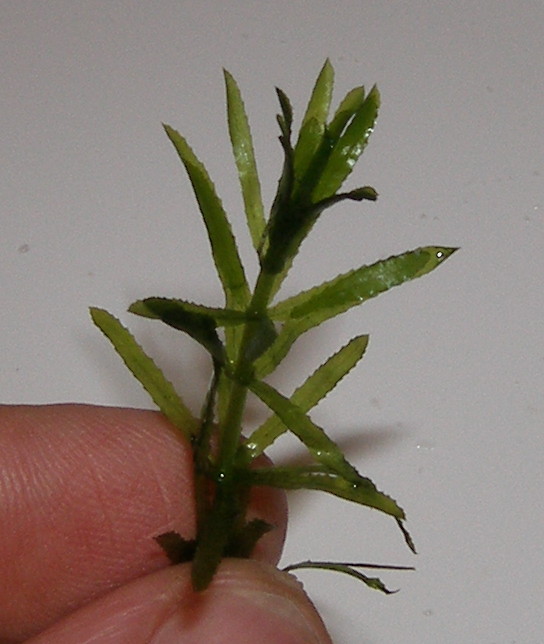 Hydrilla is sometimes called an invisible menace because most of the time you don't know it is there until it has filled the water. It will shade out native aquatic plants until they are eliminated. This forms a monoculture, which will reduce biodiversity and alter the ecosystem. Hydrilla not only poses a threat to other plants but to animals as well. When hydrilla becomes over abundant, fish population imbalances are likely. The dense mats of hydrilla will alter the waters chemistry by raising pH, cause wide oxygen fluctuations, and increase water temperature.

Hydrilla is an economic drain. Millions of dollars are lost due to reduced recreational opportunities as hydrilla mats interfere with boating, swimming, fishing, etc. In flowing waters hydrilla will greatly reduce flow and can cause flooding. For operations that require water intake, hydrilla can pose a problem by clogging the intake pipes. Waterfront property values drop in areas infested with hydrilla. Millions of dollars are annually spent trying to control this aquatic pest.

Hydrilla is a perennial plant that forms dense colonies and can grow to the surface in water over 20 feet deep. Hydrilla branches profusely and after reaching the surface it extends across it forming thick mats.

Hydrilla can reproduce by fragmentation, from seeds, from turions (axilary buds), and from tubers. Leaves are blade-like about 1/8 inch and 3/8 inch long with small tooth margins and spines on the underside of the midrib which make them feel rough. Leaves are usually 4 to 8 in a whorl.

Hydrilla is often confused with the native Elodea. Hydrilla has one or more teeth on the underside of the midrib; Elodea does not have midrib teeth. The teeth make Hydrilla feel rough when drawn through your hand from base to tip.

A. Once water temperatures are around sixty degrees or warmer and the plant is viable.

Q. How often do I need to treat Hydrilla?

A. Hydrilla can grow quickly. Wait, watch and see after the initial treatment but two applications are not unusual. Be aggressive with this aggressive exotic plant.

A. Generally within two weeks things will be cleared up.